Which Bait-Dropping Device Should I Buy For Fishing 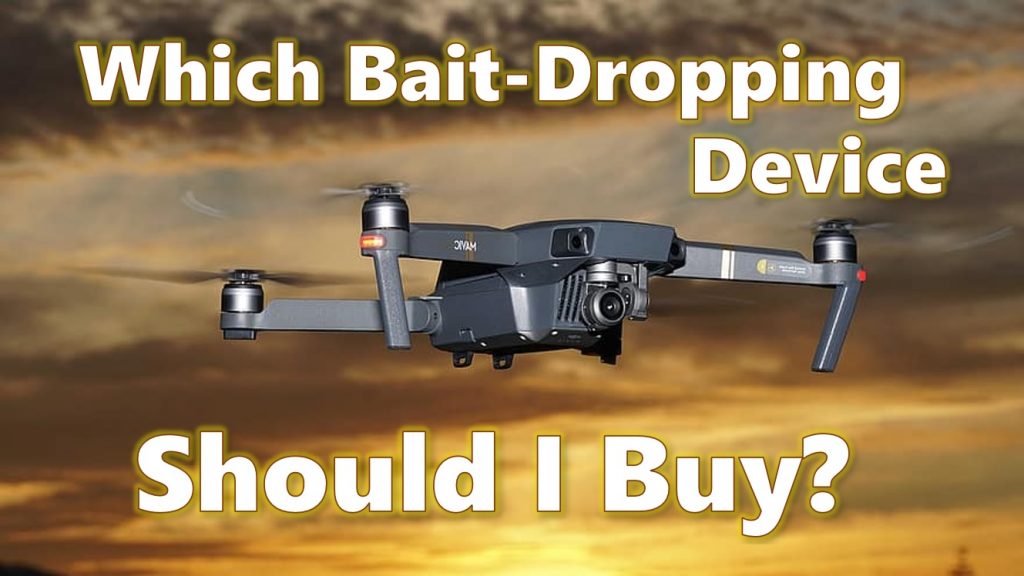 In drone fishing, the selection of bait dropping devices is not huge. On one side of the competition, there are only a few companies that produce high-quality devices, such as SkyClip and Sea Ulcer. And on the other side, there are, of course, China-made non-branded bait-dropping devices which some of them are good and some aren’t.

Are China-made bait-dropping devices any good?

First of all, China is not a person, it’s a country. So we must not generalize Chinese production as low-quality. Also, you should know that like most of the things, even the high-quality products are being made in China. So, you should not have anything against China-made products (general speaking).

Having said that, since factories in China have competition between each other, and also between other factories around the world, people start looking for a product by its price. And this is where China has the biggest advantage over the rest of the world.

This is also the reason why we focus on which bait-dropping device should you buy for fishing, and not from which country you should buy.

In most cases it is, but that is not always true. China, you see, does not have any obligation towards the world when it comes to cloning products. When a new product is introduced to the world, the price that is set for it reflects its usefulness and not its cost of production.

So when a Chinese factory sees an opportunity, sees a specific product that has a demand, that factory buys that product for themselves and simply clones it. Then, the factory set a new price that reflects the cost of production and not its usefulness. Of course, the product will not look 100% identical – to prevent trouble. But still, it is the same product at the cheapest price possible.

Buying that cloned product can save you, and other customers, a lot of money – assuming the quality of the product was not affected.

The other way around…

So, now that we are clear about China, let’s continue…

Which Bait-Dropping Device Should I Buy For Fishing

So your options are quite simple (and limited). And it’s even simplier when you take into consideration your drone, in case you already bought one.

In general, a bait-dropping device will cost you starting from 50$ and it can go up till 250$. The only question will be which drone do you have, and how much are you willing to spend.

I will divide the bait-dropping devices into 3 major groups which will be easier for you to understand.

For each one there are advantages and disadvantages which I will explain here. But in the end, it will be up to you to decide which one you prefer. While some people prefer to just press a button to drop their baits, others prefer to pay much more and get a better product. As long as you know the capabilities and limitations everything should be fine.

So, shall we begin?

First, are the electric bait-dropping devices. They are the easiest devices for people to operate. Simply, you press a button on your remote control, and the bait falls down into the water, exactly where you wanted to put it.

The installation of these devices is simple, and won’t take you more than 3 minutes to install. And once you install it, it is not permanent – you can easily uninstall it whenever you want.

The electric bait dropping devices are also divided into 3 subgroups:

This method is the most common and you will see it in 99% of the electric devices. It eliminates the need for having its own radio frequency to operate the device.

You can find such a device for DJI Mavic Pro, Mavic 2, Mavic Air, Mavic Air 2, Phantom 2, Phantom 3, and also for Phantom 4.

Bait-dropping devices that work with a remote control

Previously, in this group, there were several companies. However, today, there are not too many left. The most famous one is FLiFLi. The FLiFLi works with its own remote control, allowing you to open and close the device. On one hand, you don’t need to hide any LED light of your drone. But on the other hand, having its own remote control means they use their own radiofrequency.

This solution can be an issue in situations where you took the drone away from its range. And since you don’t have any indication for its range, you might end up in a situation where you will try to drop your bait, but it won’t work, ending up risking your drone, trying to fly back carrying the bait with it. Another point regarding the FLiFLi devices is that they are compatible only with the DJI Phantom 3 & 4 drones. And their price is a bit expensive.

But except for the FLiFLi, there is another payload release that works with remote control. This device is compatible with several models of drones and can be easily attached to them. This device is not expensive, and in case you have several drones, you will be able to use it on all of them. So it is the most versatile payload release you can find. 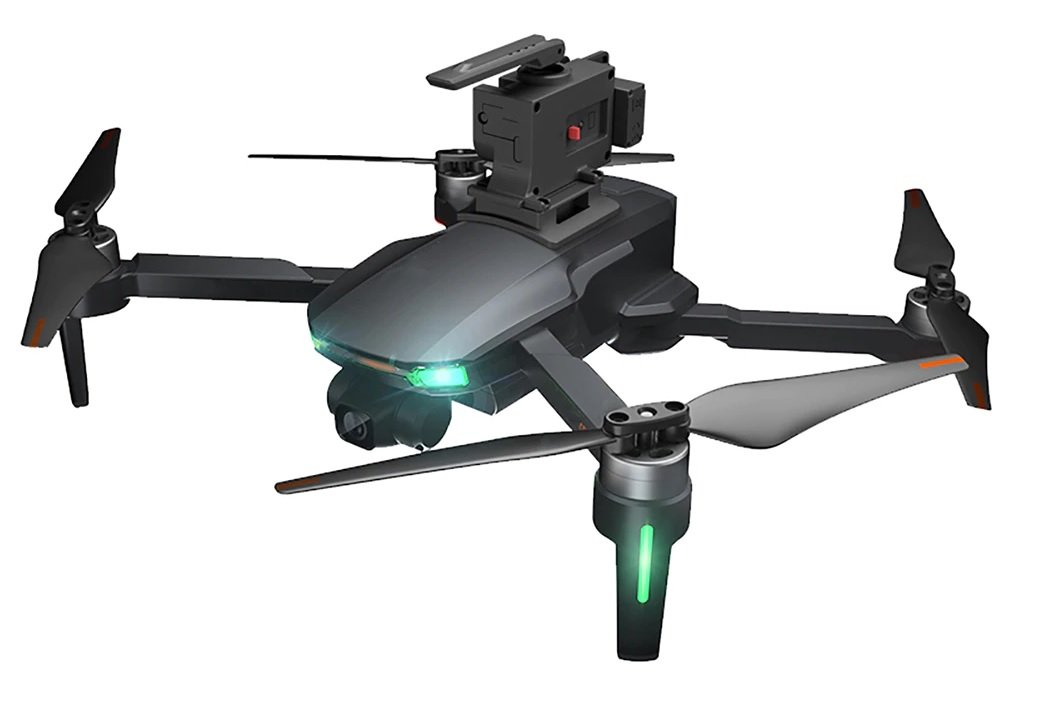 Bait-dropping devices that work with timers

The last type of electric device is one that has a timer on it. So you can set the timer to 3 minutes and then fly the drone to your desired spot. And after the time that you set, the bait will be released from the device. This method is an addition to the first electric method we just mentioned. So it will help you in case there will be a failure of the LED light.

These bait dropping devices are less easy to operate (compared to the electric ones) but are safer for your drone. First, let me explain what does it mean. The tension release devices work exactly as their name offers. In most brands, there are 2 ball bearings facing and pushing against each other. Behind the ball bearings, there is a spring that sets the tension between them – this tension, in some devices, can be set manually using a screw. Other brands, such as the SkyClip, arrive already preset specifically to the drone you have.

The way to fish using such payload release devices is mostly using a drop loop. A drop-loop is simply a loop that you will need to make on your fishing line in order to place it behind the ball bearings. This way it will be able to carry out your bait. In the following picture, you can see the SkyClip (the previous model for the Phantom) which has a drop loop.

You make the loop where ever you want on the line. Placing it at the end of the line, or in the middle is up to your decision and fishing style. You can learn more about the drop loop in our post for drone fishing rig setup.

Before jumping to the next method, I would like to clarify that this method is not new, and was not invented by SkyClip or others. However, with this type of device, the price for it was set according to its usefulness and not according to its production cost. That was the reason 2 years ago, you could find such a device for around 200$ (and sometimes even more…). SkyClip, on the other hand, took this concept, fully tested it, and producing it at a high-quality factory in Europe, and the best part of it, they sell it to you for a very reasonable price, much lower than the other competitors. And as for today, they are the most economic bait-dropping device you can buy for your drone.

Another great company in this industry is Sea Ulcer. Sea Ulcer is the only company that took a different approach with this method. They are not using ball bearings. Instead, they created their Sky Rigger which is using plates instead of ball bearings. The difference with this method allows you to not change anything in your fishing rig in order to cast your bait.

With a mechanic bait dropping device, you load your bait to your device, and when you decide that you want to release the bait, you just close the bail of your reel and fly the drone forward. causing increased tension on the device, which leads the line to be released from the device.

The third type of payload release device is somehow a combination of the two solutions into one device. Most companies just combine the electric device together with the tension release technique. This type of combination (mechanic and electric) bait dropping devices are pretty straightforward. You can drop your payload by pressing a button on your remote control, or even when a specific tension was noticed. This combination basically covers you from all problems that can occur to you during your fishing with your drone.

The main downside of such devices is their price. They are the most expensive devices among the rest (in most cases they are double the price).

Till 2020, Drone Sky Hook was the leader in manufacturing such devices, however, you can also find such devices with other brands such as SkyClip and Gannet. However, SkyClip is the most serious player in this market you should not ignore since SkyClip is currently leading this competition offering high-quality products at the most affordable prices. Recently, they have developed a new series called the “Commander” which is compatible with all most known fishing drones such as Phantom and Mavic by DJI, and EX1 and Trident by Cuta-Copter. They have worked on the commander series for a long time, and the reviews on them are wonderful.

Again, keep in mind that these devices are electric, which means that they require a battery. Which, in other words, it means you need to hide one of the LED lights of the drone.

To make a long story short…

So after this entire explanation about bait dropping devices, your question “Which Bait-Dropping Device Should I Buy For Fishing” still remains. Well, I am not here to tell you which brand to choose from. I do want you to first consider how much are you willing to spend on the device.

I often meet anglers that started drone fishing with a coat hanger and then decided to take another step towards a dedicated bait dropping device. By the way, yesterday I was talking to an angler that is fishing with his Phantom 4 for the past 5 years with a coat hanger – no issues for him so far. I also noticed that most anglers prefer to begin with the electric device since it looks like the easiest solution for them.

Which Bait-Dropping Device Should I Buy For Fishing? Well, if you don’t want to spend a lot of money I suggest you go with a tension release device. Devices such as Sky Rigger and SkyClip are decent solutions, to begin with. However, if you want to have a better all-around solution, for that my friend, I will recommend you to choose one of the devices by Drone Sky Hook. Just keep in mind that you will need to pay more for that.