What is a Fishing Drone? 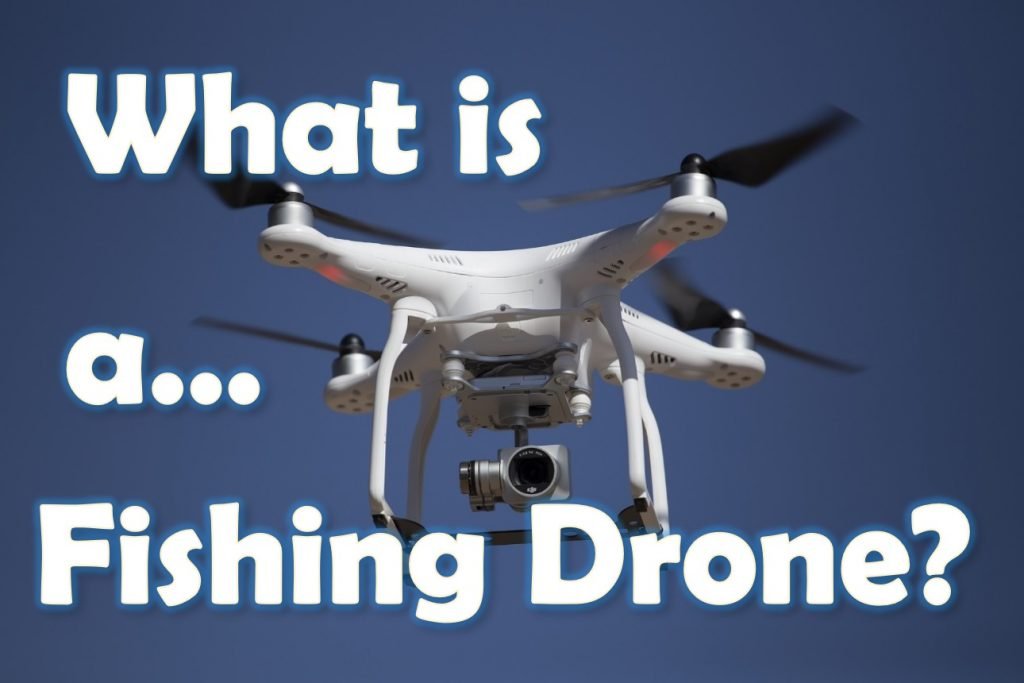 You see, I am speaking with drone fishing anglers almost every single day. And just by looking around you, you will see that most fishing anglers are using Phantoms and Mavics for their fishing. And, yes, I know that some of them chose these drones since it is cheaper than other drones, still, for others, it was the best choice they could make. This is basically one of the proofs that anglers don’t really know what exactly a fishing drone really is.

Well, don’t get me wrong, while Phantoms and Mavics are great drones to be used in order to cast your baits, that is far away from what a fishing drone really needs to be. Why do you ask? Well, this is because most senior anglers don’t know how to operate drones. So, ask yourself, except for drones, is there any other fishing accessory that a senior angler doesn’t know how to use? Of course not. If it’s rods, reels, hooks, or any other fishing accessories, it won’t be a problem even for a normal angler. So how come when it comes to drones, most anglers don’t know how to use them?

You might claim that drones are too modern for a senior angler. Let me say that if we had this conversation 5 years ago, I would agree with you. But, as time went by, some technologies adapted themselves for the end-user.  And, as you might understand where I am going, the same goes for drones.

So, first, let me begin with what are the challenges with a regular drone that was “converted” into a fishing drone. And in which I claim they are not real fishing drones.

It needs two for a tango

First, as much as it might sound ridiculous to you, a fishing drone should not be a challenge for the single angler. In addition, you should not need an extra hand in order to go fishing with a drone. But, when I go fishing, I often see at least 2 people when it comes to drone fishing. The reason for that is simple – One person operates the drone while the other one is in charge of the “real” fishing equipment. Is it really necessary?

So, the way I see it, firstly, a real drone fishing angler won’t need an extra couple of hands in order to go out fishing using his drone.  Don’t you think the same as me? 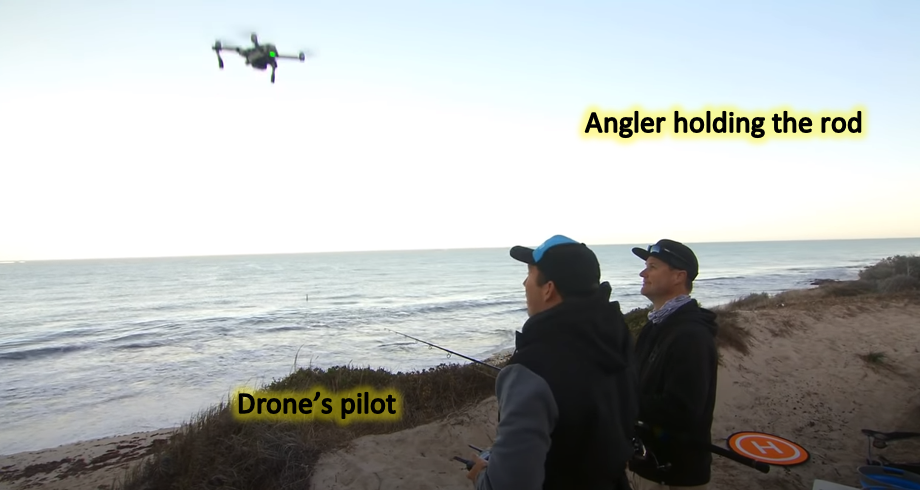 It can go for a swim

Well, as you know, water and electronics were never good friends. And if you are not using a dedicated fishing drone that is 100% waterproof, any mistake that will happen (no matter whose fault is it), is going to be the end of the story for your drone. I, personally, stopped counting the number of people that dropped their drones right into the ocean.

I do have to say that in this matter there is a huge difference between falling into freshwater and saltwater. If your drone fell into a lake you have a good chance to save your drone. However, if it fell into saltwater, the chances to revive the drone (in case you will find it) are almost none.

I highly recommend you to read our post about how to fix a water-damaged drone. If you are not using a dedicated fishing drone, there is a chance you will need to know what to do in this situation.

When it comes to the size of the bait, we never realized that we can think big. Basically, before the days of the drones, we couldn’t cast 2Kg of bait with our road. So basically, we never considered using heavy baits. But wait a minute, who said that a fishing drone should only carry out our normal baits. While every drone can carry a payload, the question to be asked is what is the drone’s limit? So, when looking at normal drones, the maximum payload for them will be around 650 grams. So, if you are after bigger fish, you should be using bigger baits. And for that my friend, no normal photography drone can help you. 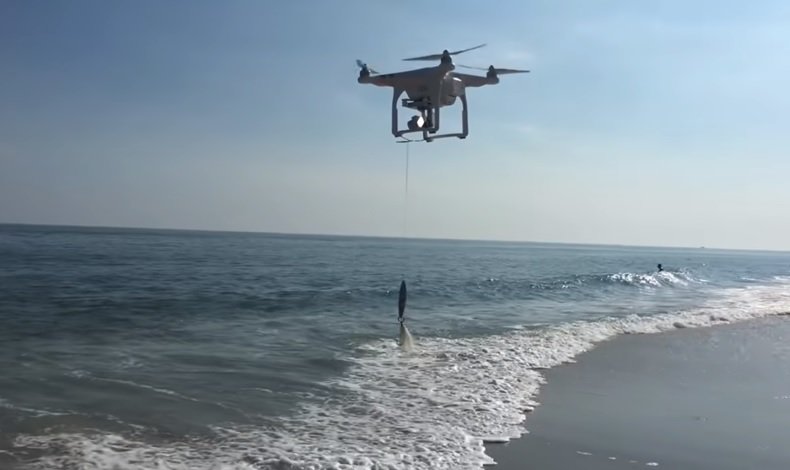 I know that most of us think that 650 grams are enough. But seriously, think for a moment why it is enough for you… Isn’t it because you are used to it for a long time? I know an angler that when is catching a 2Kg fish, he uses it right away as bait in order to catch an 80Kg tuna fish. Using a dedicated fishing drone will allow you to “dream” bigger. Trust me, it worth it.

When talking about regular drones that can be used for fishing, as the Phantoms and Mavics, you are getting a great drone that has features that you, as an angler, do not need. In other words, it doesn’t matter which drone you will buy, in the end, you will spend the same amount of money, but you won’t get what you actually need. For photography the Phantom and the Mavic are wonderful and they worth every penny they cost. But, don’t you prefer to pay the same but get more? I am sure you are.

But there is something that is even worse of that, and this is getting features that are dangerous to the drone itself while using it for fishing. For example, on many drones, there are sensors that position the drone correctly in space. However, these sensors do not work properly while the drone is flying above the water.  While in some drones you can turn off the sensors, in some other drones you can’t. Also, it is not guaranteed that you will remember to do so when you will use it in fishing.

If you visit the DJI support page, you will see that they warn pilots of flying over water

When you buy a non-dedicated fishing drone, you will not be able to automate your steps specifically for fishing. For example, you can’t instruct your drone to fly to a specific location, drop your bait and return home right after it, which in the meantime, you do not touch the remote control. There are other missing features in DJI drones, such as not take a course of flight in case there is not enough battery for it.

Not having these features caused many drones to crash into the water, and also waste a lot of time on the beach messing with your drone instead of doing what you originally want – which is fishing.

Redefine what is a fishing drone

So, after listing in here all the important key points about drones, do you still only expect your drone to just take your bait out? Or, would you agree with me that you can get much more in return for your money? For me, it is important that you will know your options and possibilities. Spending 1500$ for a non-dedicated fishing drone, for me, is a waste of money – unless you need the drone for photography tasks as well.

Is it a mistake to go with a Phantom or a Mavic?

No, absolutely not! Choosing the Phantom for fishing is not a bad decision. The same I would say about the Mavic. What I am saying, is that you can get, for the same money, more out of your drone. And that “more” I am talking about, is fishing-related only.  So, if you want more from your drone outside of the fishing court, dedicated fishing drones won’t be relevant for you.

And, if you decide to go with these drones, you have great drone fishing accessories that make sure your drone will be safe, and your fishing will be more enjoyable, but keep in mind it won’t provide you with all the things I have listed.

Despite the fact that we don’t have a wide selection of dedicated fishing drones today, still, you have more possibilities than you had in 2015. Today, drones, such as the SplashDrone 3+, or the Cuta Copter EX1 6S are great options that worth their money. There are other dedicated fishing drones in the market, such as the IDEAFLY or the Gannet Pro, but, these drones are not as mature enough as the ones I mentioned earlier.

In this post, I didn’t get into basic subjects that you might ask yourself during the reading of this post. Questions such as what is the best drone for fishing, or even what are the advantages in drone fishing. In this post, I wanted to clarify the difference between a regular drone that can be used for fishing to a dedicated fishing drone.

And since I speak with many anglers almost every day, most of them think a fishing drone is a drone that can “cast” their baits to their desired fishing spot. But, for me, it is important to stand on the differences between a drone that can be used for fishing, to a drone that was born for fishing.

I hope you enjoyed reading this post, let me know your comments down below, what is your favorite drone for fishing and why? As always, fly safe and tight lines.