Gladius Mini VS FIFISH V6 – The Surprises on Both Drones

Before I will start with the Gladius Mini vs FIFISH V6 comparison, I would like to point out a great new feature that both drones have, which is the HDMI output.

Having an HDMI output for your underwater drone means you can sit in your boat or yacht and connect it to a computer monitor, plasma screen or even a TV, and by that, you can see clearly what’s going on under the water. This is a huge improvement since, you can stop seeing thru the small screen of your phone, tablet or iPad.

The depth lock is yet another great feature in both the Gladius Mini and the FIFISH V6. The name stands by itself, meaning once you set the depth you want, the drone will keep that depth level, and you can now move it forward, backward, left and right and the drone will keep its depth. This is great for supervision or filming.

One of the cons of underwater drones is the fact that most of them cannot tilt. Tilting is very essential when you need to inspect or follow objects on a grainy ground, like sand. Since the thrusters will bland the sand, it will result in an unclear image in front of the camera.

For example, if your mission is to follow a fish on the ground, that will be almost impossible. And if you need to search for something on the ground, your only way to do it will be by landing the drone on the ground and not move the drone so the thrusters won’t blend the sand. It is possible, but no one will have the patience to do it this way.

Here is a short video of the FIFISH P3 while trying to inspect an object on the ground:

So, by having a tilt lock, inspecting objects, or even following objects on the ground is now easy.

Keep in your mind that even with the tilt lock feature the sand will blend on the ground, so, it all depends on how powerful you set the thrusters on.

In this manner, the FIFISH V6 has even more capabilities than the Gladius Mini, but I will get into that in a moment.

Like I did on other comparisons, like for best fishing drones or fishing camera, I will explain what I am about to compare between the Gladius Mini and the FIFISH V6.

We will first compare the content that comes with the drones, available accessories, features, some specs for each one, and finally the price.

The basic package of the Gladius Mini comes with a base station, remote controller, reel with 50 meters of tether one charger, which can charge both the drone and the base station and 2 buoyancy weight models – one for saltwater and one for freshwater.

However, regarding the wireless feature, you need to be aware of a few risks about it. First, the base unit is not waterproof, so make sure you place it is a safe place. Second, since your eyes are going to be on the monitor and not on the base unit, if you will send the drone longer than 50 meters (or whatever length you chose), you will say goodbye to your base unit and to the drone as well. Last, let’s say you sent the Gladius Mini only 20 meters, which leaves you with another 30 meters, however, there was something in the tether that got stock like a knot (or something alike) that will pull your base unit towards the water as well. So, please make sure you secure the base unit before using the drone.

As for the FIFISH V6, it comes with 50 meters of tether, a remote controller and 2 chargers for both the drone and the remote controller. However, it does not come with a spool and an HDMI module, which in case you are interested in, you will need to purchase that separately.

A very important thing when buying a drone is the offered accessories it can have. When dealing with underwater drones, there aren’t too many accessories, however, some of them are very essential for your adventure to be successful.

For the Gladius Mini, there are currently 2 additional accessories that you can purchase. The first is a bag pack and the second is an upgraded longer tether of 100 meters. This is available when you decide to buy the drone and have it with 100 meters of tether instead of the 50 meters.

As for the FIFISH V6, there are 4 available accessories, a VR goggles, a 100 meters’ tether, an HDMI module and spooling reel for the tether.

By the way, as from the 23rd of May till the 7th of June (pre-orders period), the VR is given for free, so it is something worth considering.

There are other accessories for the FIFISH V6 that QYSEA has, like 200 and 300 meters of a tether. However, they will be available later. Having a 200 (or 300) meters of tether allows you to scan wider areas without you moving from the shore or moving the boat.

Features are an important issue, and frankly, I don’t think that there is someone better than the other. Both are wonderful underwater drones. And great features like using a VR, Depth lock, social network sharing, and live streaming are few of the features both underwater drones have. And I will continue to our next comparison of the Gladius Mini vs FIFISH V6.

In this category, the FIFISH V6 gave a knockout – but that is a knockout not only to the Gladius Mini but to all the other underwater drones out there as well.

While the Gladius Mini advertised its capability to tilt by 45 degrees up and down, QYSEA prepared a surprise by allowing the FIFISH V6 to fully tilt by 360 degrees.

But that is not all. As QYSEA called the FIFISH V6 – the only OMNI directional underwater drone.

That’s means, that in addition to 360 degrees of tilting, the FIFISH V6 is even capable of yaw and roll in 360 degrees. Wow!!!

There is no other way to describe these truly amazing movement capabilities, which no other underwater drone can do, including not the new Gladius Mini.

These movement capabilities cannot be ignored – and by far makes the FIFISH V6 one of the best underwater drones today.

Inspections That no-one can Do Except for FIFISH V6 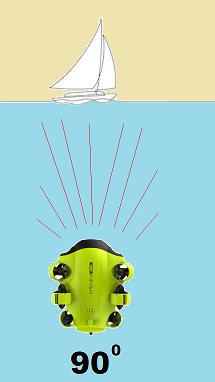 Well, thanks to the unique movement capabilities of the FIFISH V6, there are some operations that cannot be done by any of the underwater drones today, except for the FIFISH V6.

Imagine you need to find a leakage or a broken piece at the bottom of your structure or maybe even look for something extremely small at the outer bottom side of your yacht. Well, from now on, this is possible and most important, it is very easy. This makes the FIFISH V6 as the most serious inspection equipment.

The possibilities of the FIFISH V6 are truly unlimited, inspecting even big sea creatures from the bottom, or even… well, I think you got the idea. This is trulu AMAZING!!!

But, enough talking, here is a video introducing the movement capabilities of the FIFISH V6

Another super important feature in an underwater drone is the camera quality. No need to explain to you why… right?

As both the Gladius Mini and the FIFISH V6 have a 4K camera, some people think that probably they are having the same quality. However, there is much more than being a 4K camera. So, let’s see what these underwater drones offer us.

One of the most important things about the camera is its CMOS (the camera sensor). Lots of quality depends on it. And for that, the Gladius Mini and the FIFISH V6 are having the same sensor (Both sensors are the 1/2.3-inch size).

But on other parameters which provide a better picture, the FIFISH V6 is better than the Gladius Mini. Let’s take a look.

Don’t get me wrong, both drones will have good lighting in the picture, but, aperture 2.5 with 4000 lumens will bring a much brighter picture than aperture 3.0 with 2400 lumens. Especially when we take our drones to deep locations, where the lighting conditions are bad. And it will be more effective when inspecting objects deep in the ocean.

Another aspect of the camera is the ISO. In case you are not familiar with it, ISO is a way to compensate the light – in low light scenes. A higher ISO means more light and a brighter image, while lower ISO means less light and darker image.

Before wrapping up about the camera quality, there are several more features that the FIFISH V6 has, like white balancing and EIS (Electronic Image Stabilizer), which the Gladius Mini doesn’t have.

Last, in our comparison of the Gladius Mini vs FIFISH V6, I decided to bring some technical specs about both drones. Some of the things are really important. Let’s take a look.

Also, you can put in the FIFISH V6 a memory card up to 256GB, while in the Gladius MINI you can have it up to 64GB.

Gladius Mini VS FIFISH V6 – It’s all about the money

Or maybe it is now…

To be honest, I was surprised to see the price tag for the Gladius Mini and for the FIFISH V6. I expected them both to be more expensive since they feature great new capabilities (as I mentioned earlier).

Does it worth you paying an extra 100$ or 200$ (depends on the package), well, that will be up to you to decide. In terms of monetary value, I must say the FIFISH V6 worth every penny.

You won’t go wrong, no matter what you choose.  After all, it depends on what you need it for.

I have gone thru many features and specs for both drones, in order to decide which one is better. And even with considering the price tag of both drones, there is truly no place to be wrong here.

First, as I said earlier, both underwater drones are amazing. However, the FIFISH V6 is better than the Gladius Mini in most of the aspects, and in price, they are basically almost the same.

The FIFISH V6 has a better camera quality, has better movement capabilities, has longer battery life and can even go for longer distances (soon, as QYSEA will release their 200 and 300 meters of tethers), and you don’t need to pay much more for it. You can’t ask for a better deal than the FIFISH V6.

You can decide for yourself whether the base station of the Gladius Mini is an advantage for you or not. I considered that as a disadvantage since in my opinion it can seriously risk your drone – But that is up to you to decide.

I hope you enjoyed reading this comparison of the Gladius Mini vs FIFISH V6. Let me know what you think in the comments section below. And till the next time, tight lines.