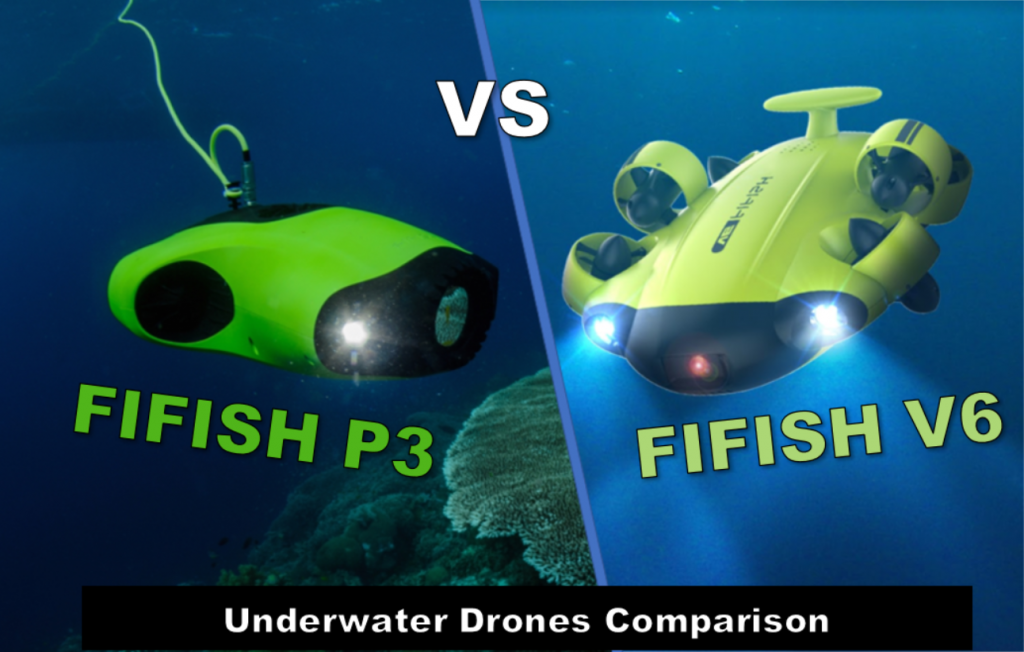 So, after my latest comparison of the V6 with the Gladius Mini, it is time to compare these 2 QYSEA siblings, the FIFISH V6 vs FIFISH P3.

I must say that it was a bit tricky to compare these 2 underwater drones. This was only due to one big main reason – which is the fact that the V6 and the P3 are not competing with each other.

So, you may wonder, if they don’t compete with each other, why comparing them from the first place? Well, the answer to this is very simple. I made this comparison, so you will know which one you better choose for your underwater tasks.

With that said, there are two main fundamentals which I will compare:

Except for these 2 fundamentals, I will also compare other aspects as well, so make sure to read this FIFISH V6 vs FIFISH P3 comparison till the end.

Well, no surprise in here… if you read our post about the introduction of the FIFISH V6, you surely know that no one can compete with the FIFISH V6 in its maneuverability. The FIFISH V6 is the only OMNI directional underwater drone in the world.

When seeing the FIFISH V6, it has 6 thrusters, which means 3 thrusters more than the FIFISH P3. These 3 additional thrusters bring freedom in its maneuverability, which the FIFISH P3 cannot achieve.

Basically, the FIFISH P3 can go forward, backward, up, down, left and right. The FIFISH V6 has additional capabilities which it can tilt, yaw and roll in 360 degrees in each direction.

Here is a short video demonstrating the freedom of the FIFISH V6:

Regarding the depth, whatever you will set the drone to be in, both the FIFISH V6 and the FIFISH P3 will keep their level.

The FIFISH P3, unfortunately, does not have this feature. Well, it is not relevant from the first place for a drone that cannot tilt, roll or yaw.

I must say, that only the camera itself, can be very expensive. And each additional feature in the camera can make a huge difference in the final price of the drone. Usually, companies are mentioning that their camera is 4K, letting you think that this is enough for producing high-quality pictures.

Don’t get me wrong, 4K is awesome, but just saying 4K is far from being enough. 4K does not say much about the quality of the picture nor the video.

for example, My Canon M50 camera can shoot in HD and in 4K, and most of the time I film in HD and not in 4K. There are many reasons for that, and I won’t get into that in here (after all, this post is not about teaching you here how to film videos, or shoot high-quality pictures).

Underwater Problem – The Lack of Light

As I said before, the camera quality in underwater drones is super important, one of the main reasons for that is the lack of lighting under the water.

The lack of light basically affects the way you see the colors under the water, and as much as you go deeper, the lack of light becomes worse, till it won’t let you see anything properly. So, the camera features in underwater drones become crucial if your tasks go deeper than 100 feet.

Here is how the colors are affected in our eyes as much as we go deeper into the sea: 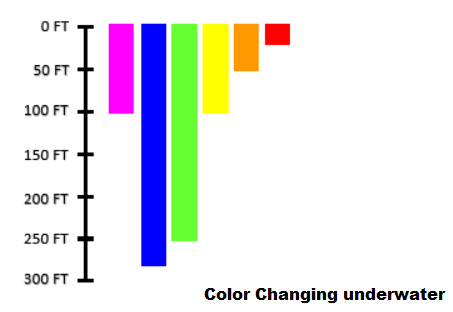 In this category, both the V6 and the P3 are having the same strength of led lights. They both have 2 LED lights in front of the drone. Each LED light has a strength of 2000 lumens, which together they come to a total of 4000 lumens. A very impressive strength that will provide you with enough lighting under the water.

It is important to say that a higher aperture, which is less of f/4.0, can be quite expensive. Here is a comparison between two cameras featuring the differences in the low light capabilities. The camera on the right side (SwellPro PL4) is having an aperture of 2.0 which is the highest aperture possible.

FIFISH V6 vs FIFISH P3 – Is it all about Aperture?

The FIFISH V6 is having a better aperture (2.5) than the FIFISH P3 (2.8). However, before you think that this is it, there is another important element when we need to film in low light conditions. This element is called ISO. The ISO basically measures the sensitivity of the image sensor ( I will get into the sensor part in the next section). A lower ISO value means that the camera is less sensitive to light. With that said, the maximum ISO value for the FIFISH P3 is 12800, while the FIFISH V6 is having a maximum ISO of 6400 – half of the P3. When combining the aperture and the ISO together, the FIFISH P3 will have a brighter image than the FIFISH V6.

Another unique feature the FIFISH P3 has is the existence of 3 focus modes. If you are an underwater photographer, this section is extremely important for you.

In short, any photographer cares a lot about focus, and the FIFISH P3 supports 3 different focus modes:

While all underwater drones have a normal focus mode (including the V6, Gladius Mini, and etc), the FIFISH P3 has auto-focus which means that no matter what the P3 is looking at, it will focus on it. This feature is extremely important if you care about high-quality videos.

Here is a video showing the Auto-Focus mode in the FIFISH P3:

Both underwater drones are using CMOS sensors, however, the P3 is the winner on this category. The FIFISH P3 is having a 1-inch sensor, while the FIFISH V6 is having a size of 1/2.3 inch.

You can read more about CMOS sensors at the BASLER website to better understand the importance of sensor size.  In short, a bigger sensor size means:

If you look closely you will see a sharper image, even thou the picture on the left has a better aperture of 2.2.

Just before I sum everything up about the camera, I think that a good way to emphasize how great the quality of the camera the FIFISH P3 has is by the knowing that National Geographic TM is using the FIFISH P3 in some of their underwater videos.  Do I really need to say more than that?

So, except for the 2.8 aperture which is being compensated by other great camera features, the camera of the P3 is much better than the FIFISH V6.

Except for the maneuverability and camera quality, there are other things in an underwater drone we need to check like battery life, speed and etc.

Another important issue about RC devices it’s the radio frequency they are using. While the FIFISH P3 is using the 2.4GHz, the FIFISH V6 is using the 5GHz frequency. While you might be asking yourself, why is that important? Well, this should be very important for you depends on the country you live in.

Most of the world does not restrict the usage of the 2.4GHz, several countries totally restrict the 5GHz and above. So, assuming that you decided to purchase the FIFISH V6 but you live like in a country that restricts it, the drone will be blocked at the customs and you will be charged for several fees including the shipping fee for returning it back to the place it was originally shipped from.

You can read here which countries allow and which countries restrict the usage of 5GHz. Do yourself a favor, and don’t try to import it illegally. There are lots of people that thought they can but eventually they paid a lot of money but did not get the drone.

So, basically, the FIFISH P3 has another advantage over the FIFISH V6 with its WiFi frequency.

Well, the FIFISH V6 vs FIFISH P3 comparison was not easy, and despite the fact that usually when we compare between 2 devices, in the conclusion we give our recommendation about the better one. This time, it won’t be possible.

As said in the beginning, the V6 and the P3 are not competing with each other. Some things the V6 can do, while the P3 cannot do. But, yet, there are lots of other things which the P3 can do and the V6 can’t. Your decision shall go according to your needs.

In addition, if you live in a country that restricts the 5GHz than you have no choice but choosing the FIFISH P3. Not only that, if your travel between countries, remember that you won’t be able to take the FIFISH V6 to every country. So in case you take a flight to another country, which restricts the 5GHz, your underwater drone will be confiscated by the customs authorities.

I hope you enjoyed reading this comparison between the FIFISH V6 to P3. Let me know what you think in the comments section below.

And like always, till the next time, fly safe and tight lines.