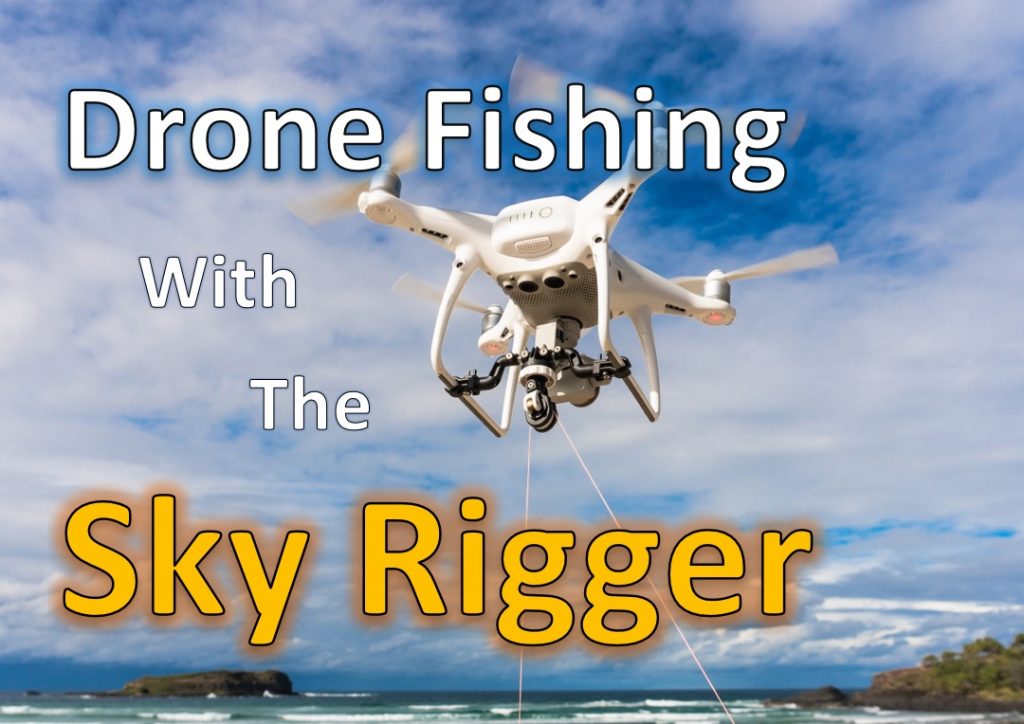 If you own a DJI Phantom, and you want to use it for fishing, this post is for you. Today, I decided to write about drone fishing with Sky Rigger. This is since drone fishing became very popular in the last couple of years, however, some basic questions remained. You see, in drone fishing, the way I see things, there are three main sections that you need to focus on.

Which Drone you should use for fishing

Well, drone fishing with Sky Rigger is available only for Phantom 3 and 4. Also, I don’t want to discuss in here which drone is the best for fishing. For that, you can read our post about the best drones for fishing. Keep in mind that there are always new drones coming in (and out). And I am doing my best to keep this post updated as much as possible.

Due to that, this article is dedicated to all of you that own a DJI Phantom 3 or 4.

Now, since I see this question quite often, I decided to clear all doubts about it. And as the title suggests, Drone Fishing with Sky Rigger, you can realize which bait dropping device I think is the best. Of course, I am about to elaborate on it in the following sections. 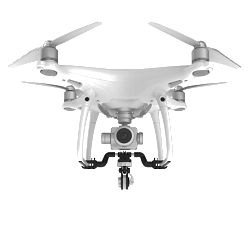 Well, before I will start speaking about the Sky Rigger, I must say that there are several devices available for the Phantom. Some, you might hear of, and some you might not. But, in this post, I am not going to compare them.

The way I see it, drone fishing with Sky Rigger is the safest device you can have for your Phantom. And here are the reasons why, which I am about to explain.

Drone Fishing with Sky Rigger – No Battery is needed

Sky Rigger is an airdropping device that does not need a battery in order to work. You see, when drone fishing began, there were many devices that were built in a way that they needed a battery in order to operate. And you could control them using the drone’s remote controller (by covering one of the drones led-light), or by a dedicated remote controller that was developed especially for that (like the FliFli). However, using a battery for such a mission has several significant drawbacks.

The first one is increasing the weight of the device. That forces the angler to use a smaller bait, due to the maximum weight load of the drone. And when we speak about DJI Phantom drones, their maximum payload is around 500 grams. The 500 grams are including the bait-dropping device as well.

The second disadvantage is the need to charge the battery. While you might not see that as a disadvantage, trust me, it is. Do you know why? Well, imagine one time that you forgot to fully charge it, and when you decide to drop the bait, the device won’t work. Also, a battery has its own lifetime and capacity. As time goes by, the battery won’t last the same time as your previous charge. So you might think that you have more from your battery, but actually you don’t. In addition, as you know, devices tend to die, and this is another scenario you should consider.

Not being able to drop the bait, while your drone is 400 meters away from you, will be a huge risk to your drone when trying to retrieve it back to shore with all the rig. Trying to do so, risks the props from tangling with the line. It also risks for the people that are in the way, since they can get hurt from the hooks. If you didn’t experience such a scenario, trust me, it’s horrible.

And if that is not enough, the battery has its own magnetic force which disturbs the GPS of the drone. I am sure you already saw several videos of drones that crashed with “no reason”. You can make a very simple test by yourself, showing that the magnetic force disturbs GPS.

Bait dropping devices with no battery

As said earlier, the Sky Rigger is a mechanic airdropping device that doesn’t require any battery. While some other companies are learning that in a hard way, Sea Ulcer brought all of their knowledge and, most importantly, their experience, in order to offer you the safest bait dropping device on the market. Till today, they are the only ones that can be proud of zero crashes. 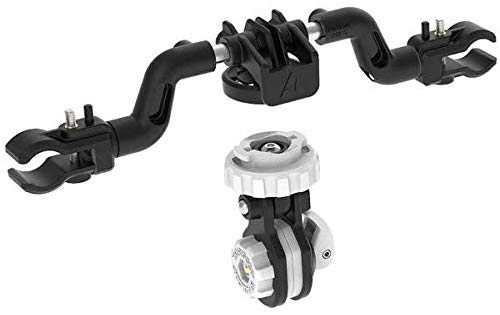 Drone Fishing with Sky Rigger – Not Hiding any Led-light

Another advantage that drone fishing with Sky Rigger has is the ability to work without hiding any led-light of the drone. In case you wonder why there is a need to hide the drone’s light, well, the answer is very simple. It is related to the previous drawback we mentioned earlier – the battery.

Well, an electric airdropping device needs to communicate with you, so you can tell the device when exactly you want to drop your bait. And since the bait-dropping device was not developed by DJI, that means that you do not have a dedicated button for it on the remote control. So, the most common way to solve this problem is by using a photoresistor. Basically, you cover one of the drone’s front led-lights using the photoresistor, and that operates as a switch. So when you turn the light on, it’s like you pushed a button. It is a very simple way, and you could find this solution on most of the electric bait dropping devices.

Disadvantages of Hiding the Led-Lights 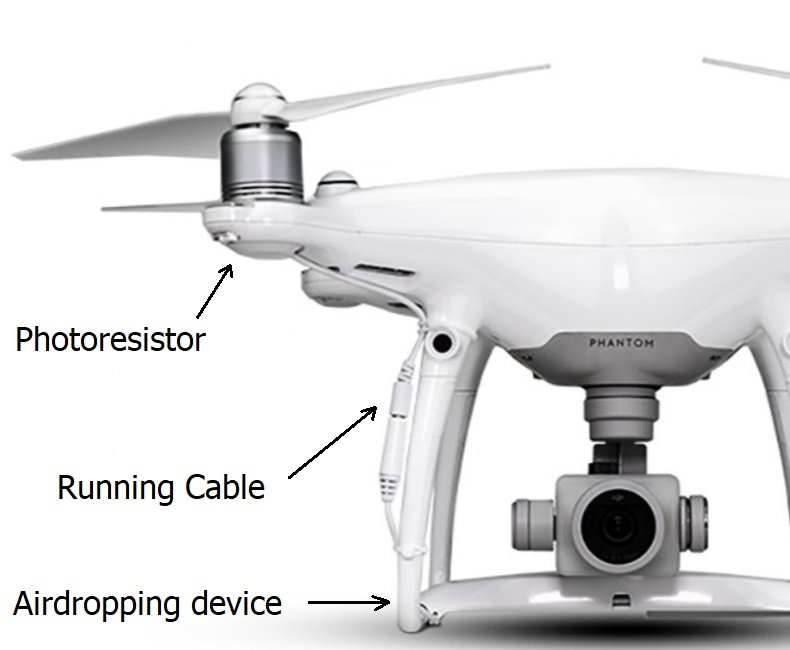 Well, like the battery. hiding the led-light of the drone has disadvantages. This is, of course, related to the fact that the device is using a photoresistor to operate.

You see, first, the installation of the device is more complicated. Not only you need to install the air dropping device on the drone, in addition, you will also need to install the photoresistor. Installing a photoresistor is easy, however, you need to make sure that its’ cable won’t disturb anything on the drone (like its propellers) in order to take off, fly, and land safely.

So, if you hide one of the led-lights, your drone won’t be visible like it should be. And don’t think only about your self. Think about other people that need to be aware of your drone.

Third, the photoresistor is sensitive. That means that on a very bright sunny day, light can get into the photoresistor. And as such operate the dropping device, and by such drop your bait. This means three things. One, the bait won’t drop whenever you want. Second, it won’t drop wherever you want. Third, it can be very dangerous if the bait will fall on other people. Those accidents can be very dangerous.

Drone Fishing with Sky Rigger – Take it from the PROs

Well, if you still not sure whether the Sky Rigger is the best solution for you, you should look at what the real professionals are using. By the way, if you think that in order to use the Sky Rigger you need to be a professional drone pilot, so the following video is the right answer for you. This is a video of Josh from BlacktipH which is a real pro in fishing – but not in drone fishing. However, after he met with Jaiden from Sea Ulcer, Josh started to use the Sky Rigger. And to be honest, he is using it as good as Jaiden. This proves that drone fishing with Sky Rigger does not require you to be a real expert. 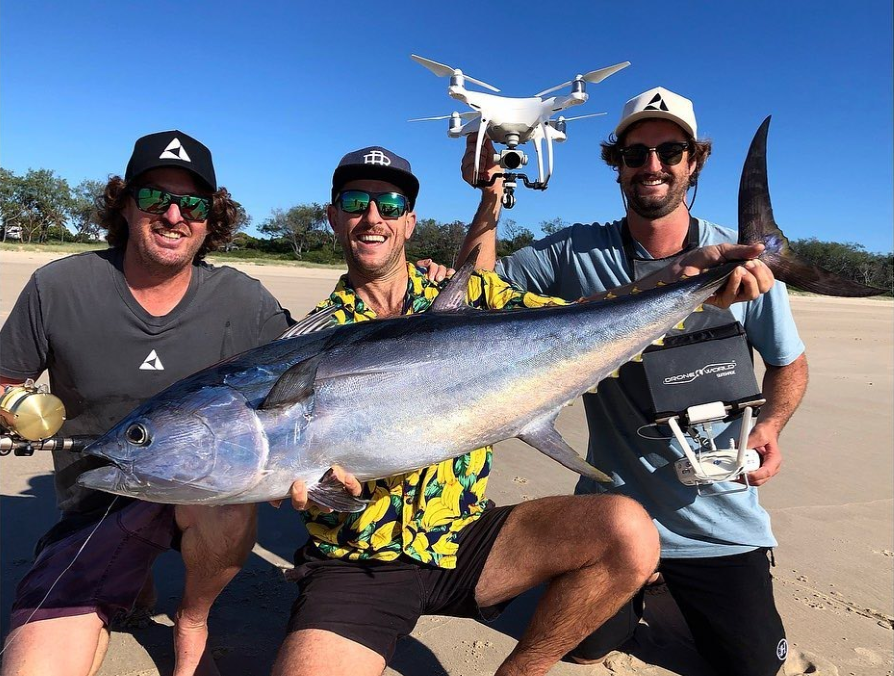 If you want to up your game in fishing, drone fishing is the solution. And in case you own a DJI Phantom 3 or 4 in your arsenal, then using the Sky Rigger is your best go-to device. Till today, drone fishing with Sky Rigger is considered as the safest device on the market. It was made by the two most professional drone fishermen. This means that it helps you protect your drone.

So what do you think about the Sky Rigger? Are you considering to use it in drone fishing or not? Let me know your thoughts in the comments section below.

Till the next time, tight lines and fly safely.