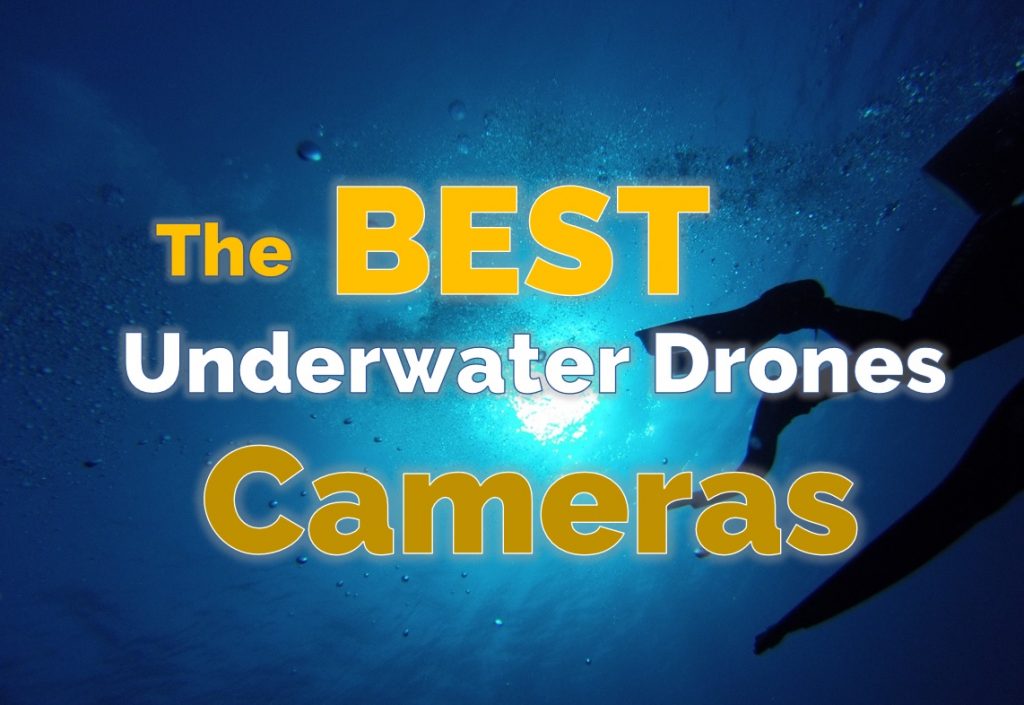 Aren’t all the cameras the same?

If you will take a look at most advertisements for underwater drones, you will find the “4K camera” slogan very often. And for many people, this slogan is enough to say that “Hey, this camera is good”.

Saying that a 4K camera is good, is like saying that a 4X4 car is a good SUV. So 4K is important, but it is far from thinking that it is enough. So sometimes paying a few more bucks can be very lucrative. And sometimes, the price of two different brands will be the same, but the camera quality will be completely different.

So in this post for the best underwater drones’ camera, I would like to explain to you what exactly you need to look for when examining the camera.

And don’t worry, this is not rocket science, everything is simple. And if you follow the guidelines, you will have a great underwater drone that will provide you with the quality you truly need. And most important – within your budget.

Which underwater drones I will review

The underwater drones I am about to review in this post are:

What will I compare – Understanding Camera Features

In our list of best underwater drones camera, I will compare the drones in the following categories:

While the list above is referring to a specific camera features, there are other features in the underwater drone that are related to the camera as well.

You will have to agree, that without these related features, the camera quality won’t worth much.

In this list, there are 9 underwater drones. One of them is Dory. Dory is very different than all the others as it does not have a remote controller and it cannot dive deep like the others.

A camera is nothing without its sensor. And as I said in the comparison between the Galudius Mini and the FIFISH V6, one of the most important things about the camera is its sensor, or in other words, its CMOS. The camera quality relays on the sensor size. In short, the bigger the better. As for most of the underwater drones, the sensor is the same, which is 1/2.3″. However, there is one with an amazing 1″ sensor size. Before I will show you the results, take a look at the difference in the sizes of them.

Now, here you can see the results of all the underwater drones we compare.

In this comparison, the FIFISH P3 is the clear winner. All the other underwater drones are quite the same. So if you are not in buying the P3, so it does not matter which other you will take. Of course, remember that the bigger the better.

Another highly important feature in a camera is its aperture. The aperture is highly important when it comes to underwater drones since the visibility is not great under the water. You can think about it this way, the aperture is all about light capturing. But keep in mind that aperture is not an indicator of the whole good camera setup. Just like most other areas of photography, the aperture isn’t a very useful number for you to go by.  It’s not an indicator of quality on its own. However, it does have some advantages, including the possibility of better low light capture.

In aperture, in contrary to sensor size, the smaller value is the better. I won’t get into technical details too much (after all I promised that it won’t be rocket science).

In this round, Dory is our clear winner. But, again, keep in mind that it must have a good combination with the other parameters of the camera. As a reference, smartphones have an aperture of 1.5 – 1.8. But still, the quality of the photos in dark environments is not good.

Field of view means how wide can your underwater drone can “see”. 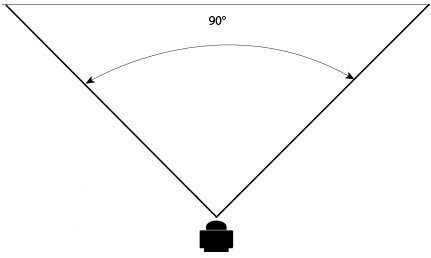 And again, the FIFISH V6 is our winner with 166 degrees. I must say that in this section, as you can see, there were 3 close competitors. The FIFISH P3, the Titan, and the Nemo are also having great FOV.

ISO is another important parameter when checking a camera. ISO indicates how sensitive is your camera’s sensor. When the ISO is lower, it means that the camera is less sensitive to light, and the final result is a less grainy picture. However, when you set the ISO to be higher, it means that the camera is more sensitive to light, and allows you to use your camera in darker situations. This is very important in underwater drones since, like we said previously, in deeper water there is less light and the visibility is lower.

When I checked the ISO for the underwater drones, some models do not indicate their ISO. So I will have them with a question mark in the above result. I do promise that once I will get the information, I will update that here ASAP.

This parameter is reflecting the image quality of the camera. Let me explain that to you, each image is being set by pixels. When a picture has more pixels, it means it has a better quality. Every camera supports a range of different qualities. It all depends on you. The higher the quality you set the camera, the more disc space will need.

Most people I know automatically set the image quality to the top, but then they find out that their disc space ran out too quickly. Hence, after that, they set the quality to a lower one. I suggest you set it somewhere in the middle and then decide if you can (or want) to set it higher or not.

In this round, FIFISH P3 is the winner. 20MP. All the others are good as well. I am a bit disappointed with the Titan that has only 8MP. Regarding the Dory, well, it is very low. But keep in mind that the Dory is a cheap underwater drone, and you do get what you pay for.

Here I compared the maximum frames per second each underwater drone can record. This is great when you want to have slow-motion videos.

With 240 frames per second, the FIFISH V6 is the clear winner here.

Before I will move to the other related features, the last feature I will discuss is the focus modes. In general, there is nothing to explain about the focus. However, some cameras are built without a focus mode. For example, camcorders don’t have it, since when you shoot the video you want all the footage to be clear. However, in advanced photography, you, as a photographer, want your camera to focus on specific things. In this section, all the underwater drones don’t support specific focus modes, except the normal one. That of course, except for the FIFISH P3, that supports 3 different focus modes. The modes are the normal focus mode, the automatic focus mode, and the microfocus mode.

In this round, well, the FIFISH P3 is the winner with supporting 3 different focus modes.

As I said earlier, having a good camera is important. However, it is also important for you to be able to use it properly. Lighting is super important in photographing. Batteries and SD cards are the ones that will decide if it is convenient for you or not. Trust me, you don’t want to take your drone out of the water too often just because you need to recharge your battery, or to clear the memory by downloading all of its content.

Well, do you remember we said that the deeper you go, the less light you have? So, this is the reason every single underwater drone is equipped with extra led lights. Well, the light is measured in Lumens, and more lumens means more light.

I have to say that I was very surprised when comparing it. I truly expected the results to be quite the same, but it is not.

In this section. the FIFISH P3 and the FIFISH V6 are the winners. I will be honest, I didn’t expect the Power Ray to be so low in external light. The Dory is quite a small ROV and it can’t dive deeper than 15 meters, however, in Dory’s case, it is not that bad.

Battery life is another aspect that is not relevant to the camera in means of quality. But it does mean how much you can capture in one cycle. Every good photographer knows that when he goes to work he needs to have extra camera batteries with him. When it comes to underwater drones, you get more time on each cycle. And here the results vary from one brand to another.

In this section, the BW Space is a clear winner with an amazing 7 hours. The one that I would expect to have more is the Gladius Mini and Dory, as all the rest have an average of 4 hours.

I must say that I don’t believe you will use your underwater drone for more than 4 hours on the water. So, the FIFISH V6, Titan, CCROV, FIFISH P3, and the Power Ray are providing you with enough time.

Last (but not least) – SD Card

Nothing to explain here, this is how much memory your underwater drone can have.

Again, the FIFISH V6 is the true winner with outstanding 256GB, which in order to clarify, this is 4 times than most of its competitors.

Before I wrap everything up

These abilities are expensive and sometimes change dramatically the final price of the drone. So basically you see great footage, and you think that you will have the same results. So make sure to look for that before coming to a conclusion or even worse, a decision.

Let’s summarize everything before jumping into conclusions

You have made a long way to this point, and now it is time to see it all in one shot. So here is a summary of all the underwater drones with the reviewed camera features. 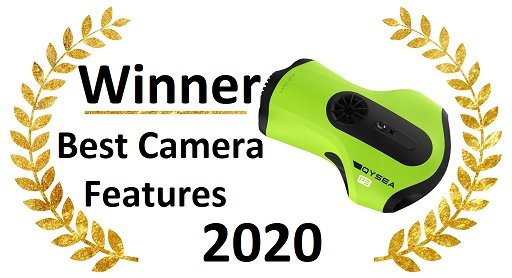 As for the other related features, here is the summary.

When summarizing the scores of the related features, the FIFISH V6 is the winner. And, it just shows how much QYSEA puts a lot of efforts in their products. I would say that if the FIFISH V6 could have the camera features of the FIFISH P3, it was a deadly underwater drone that would have killed the entire competition. 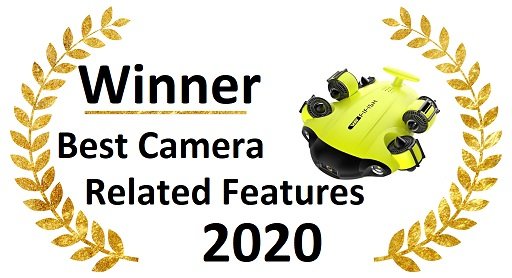 Well, that was a bit long, however, all the details were written in short. It is important to say that I focused here on camera features only. The price, dept capabilities, tether length, maneuverability, and other features and capabilities were not compared.

Another note, I was thinking a lot before adding the Chasing Dory to this list. I almost removed it from here since it was an unfair game to Dory. However, if you are on a low budget, and your footage requirements are not high it might be your go-to. If you are on a mid-budget, I highly recommend you to buy the FIFISH V6, he is the best underwater drone in my opinion. And finally, if you are after a high-quality video, the FIFISH P3 is your only option.

Let me know what you think in the comments section below, and feel free to ask me anything you want.

Till the next time, fly safe and tight lines. And I will see you on the water.