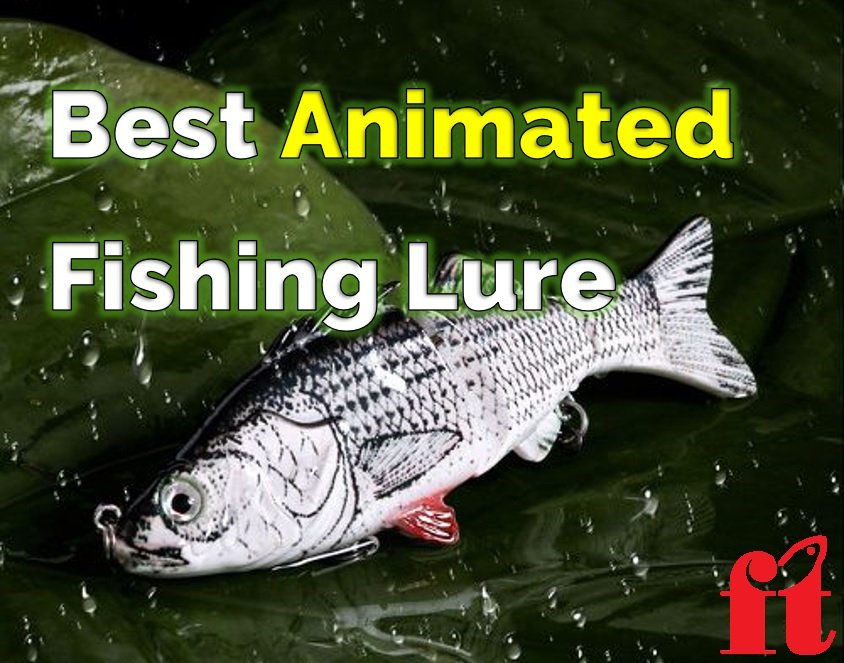 When I decided to list the best-animated lures on the market, I stopped for a second and thought about the whole fishing industry that exists today. Well, The fishing industry does not stop to invent new things for us, the anglers. Every few months we see a new type of a fishing lure that no one thought about before. And when we think that there can’t be anything new,  we are surprised again and again and again. And I will be honest, when I saw the first time in my life the animated lure, I thought for myself, that it is absolutely genius.

Animated lures are around us for almost 3 years, and they are getting more popular as time goes on. But, still, 2 years after they got into the market, there are not too many factories who make them.

The competition for the best-animated lures is divided between two factories. The first factory is sticking with the same styles for quite some time, while the other factory is making new styles and sizes all the time.

As for the movement of the animated lures, which is the most important thing, they are all the same. They all start to work after several seconds once they hit the water. They all swim in a circular path and they all stop every few seconds.

Even when I compared the working time between AnimatedLure.com and the other factory, they are the same. Some lures work for 1 hour, some for one hour and a half, and some lures work even for 2 hours. The more time you get, the heavier the lure is – due to the battery which is inside the lure.

I will start with the competitor of animtedLure.com, which makes both robotic swimming lures as well as robotic vibration lures.

First, let’s start with the robotic swimming lures, which are the exact same lures from AnimatedLure.com. The prices of these lures start at 24.5$ and reach up to 35$. So comparing it with AnimatedLure.com, it is more affordable. And on Finish-Tackle.com their prices are the cheapest you can find.

The first model of the robotic swimming lures is 13 cm long and weighs 35 grams. This model will work for 1 hour and it has 4 different styles. This model is currently the most popular robotic lure.

Moving forward for the next model, it is 13 cm long, like the previous one, but it weighs 54 grams. The reason it is heavier its due to a bigger battery – which means that this model will work for 2 hours in a row. This model has 17 different styles to choose from.

The third model is a bit longer, it is 13.5 cm long and weighs 39.3 grams. This model will work for one hour and a half. This model has 6 different styles to choose from.

The robotic vibration lures are known for quite some time and this year its been expended to have different styles.

The last model for the robotic swimming lure is 10cm long and weighs 25.5 grams. This is the smallest model, and it has 6 different styles for you to choose from.

Well, as you can see, there is plenty of styles and sizes to choose from. The first model is the most popular and also has the best price on the market. Each lure will cost you here 24.50$ – You won’t find it cheaper elsewhere.

The robotic vibration lure has 2 sizes, 13 cm, and 9.5cm. The first model of 13cm has 7 different styles and the other model, which is 9.5cm long has 2 different styles. Their price is better than all the previous ones I showed you and it will cost you 19.99$ for each lure.

AnimatedLure.com currently has 3 models for animated lures, where each model has different styles. The 3 models are Mini, Classic, and Salt-Water. Currently, their status is not very clear. This is since all of their lures are available for pre-order only. And their last post on Facebook is from July 2019 – more than a year ago.

The first model is the Mini and it’s 6.35 cm long and weighs 7 grams. The mini model has 16 different styles available, and it will cost you around 30$ to 33$, depends on your chosen style.

The third model is Salt Water. It is 22.35 cm long and weighs 147.42 grams. The salt-water model does not have too many styles like the previous ones, as it has only 6 different styles. Also, this model is a bit pricy, and you will need to pay 80$ for each lure. Not sure that I am willing to pay such an amount for only one fishing lure.

Enough talking! Here is a short video from YouTube that compares both manufacturers. While in this video, the angler did not catch anything with the animated lures, he says that the competitor actually swims better than the ones by AnimatedLure.com.

Best Animated Lure – Which one to choose

Well, you should follow a very simple rule here. If you need a small animated lure then go with AnimatedLure.com lures. Other than that, I suggest you go with the competitor. Their lures are much cheaper, you will save at least 8$ on each lure, and in the case of the Saltwater models, you will save up 55$ on each lure. Also, the extra propellers will cost you less. And trust me, I am telling you that from experience, you will need extra propellers. Assuming you will purchase 5 extra propellers, we are talking about a 7$ difference.

Normally, when I look at the average price, it means that for every 3 lures by AnimatedLures.com you buy 4 lures from the competitor.

If you are excited about fishing with animated lures, I have listed here all the best-animated lures that are available today on the market. When new animated lures will be introduced, I will make sure to update this post.

Since there is no difference in the swimming action of the lures, you need to choose the best-animated lures for you according to the size, style, and price.  If you interested in small, light-weighted lures, go with AnimatedLure.com, otherwise, I highly recommend you purchase the other animated lures, as it will save you dozens of dollars. Also, they have enough styles that you can match all your fishing conditions.

Till the next time, tight lines.